From the outset, the military camps on Makronissos became identified with the use of physical and psychological violence against detainees. Torture, in tandem with propaganda, was a vital element in the “rehabilitation” process of detainees. The torture aimed to “break” the spirit of the imprisoned soldiers and civilians so that they would sign a repentance declaration (a statement in which they disavowed their political ideas and embraced the ideas of ethnikofrosyni, or national conviction), so that the “rehabilitated” themselves would become agents for disciplining and punishing their fellow detainees. 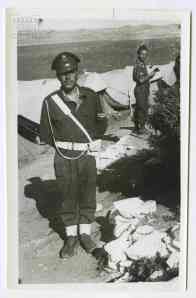 The torturers were soldiers serving in various administrative posts at the camps – for instance, the Military Police (AM) and the A2 Bureau – but also included “repenters”. Some of the torture took place in front of other soldiers or political exiles so that the sight of these relentless beatings would terrorise them into signing a declaration of repentance. The torturers used billy clubs, crowbars, whips and steel wire to beat the prisoners, dragged them along the ground, and kicked them in the torso, head and legs until they tired or the detainees fell unconscious.

Physical torture took many forms, depending on the torturer’s temperament and the prisoner’s endurance. The most common torture methods were: the falanga (continuous strikes with a crowbar on the soles of the feet), the aeroplanaki or “little airplane” (being forced to stand on one leg with arms extended outwards), the pelargos or “stork” (being forced to stand on one leg for an extended period of time), throwing prisoners fully dressed off the rocky shore into the sea and preventing them getting out, and the strappado, hanging prisoners from posts with their hands tied behind their backs and their toes barely skimming the ground.

Torture was incorporated into daily life at the military camps and every activity was accompanied by the beating and humiliation of prisoners. The chores and hard labour required for the construction of the military camp facilities were accompanied by beatings, while detainees were often assigned make-work tasks, like moving rocks from one part of the camp to another, aimed at their physical exhaustion and humiliation.

The detainee-soldiers’ “rehabilitation” begun in the Third Battalion. Under the command of the notorious Captain Panagiotis Skaloumbakas, a regime of continuous physical and psychological violence was established. Labour lasting from morning to afternoon, scant food and water, pillorying of anyone who did not sign declarations of repentance, frequent tent raids to keep the detained soldiers sleepless, beatings, sea dunkings, and falanga. Those who did not sign repentance declarations were summoned at night to the battalion’s Bureau of Moral Education, where they were subjected to lengthy interrogations and beatings. Those who did sign declarations had to prove their change of heart to the command. They made speeches to the other soldiers about the evils of communism and about the contribution of Makronissos as well as harassed and derided the “unrepentant”. Ultimately many became torturers themselves. The rule of violence, terror and propaganda was so excruciating that roughly six months later, few of the 5,000 troops had not signed a repentance declaration.

Political exiles were treated just as brutally. Upon disembarking at Makronissos, they were invited by the battalion commander to sign a repentance declaration. When the deadline for signing passed, they were savagely assaulted by baton-wielding soldiers. Faced with this orgy of violence, most of the terrified political exiles agreed to sign; those who did not were isolated from the others and taken elsewhere in the military camp and subjected to more beatings and torture. Sometimes the new arrivals were taken to tents with political exiles who had already been subjected to torture so the new ones could see what lay in store for them and thus were terrorised into signing.

As a result of the torture, constant beatings and unbearable psychological pressure, many detainees ended up at the Makronissos hospital with bruises, fractures or concussions, while others showed signs of mental illness. It was not rare for prisoners to attempt suicide.