The dire living conditions, deprivation, hard labour and torture took their toll on the health of many detainees in the military camps. While there was a military hospital on the island (housed in a building near the camp command headquarters), the inadequate medical care and the command’s indifference to the detainees’ serious health conditions, or those caused as a result of their incarceration, resulted in the death of many prisoners from heart problems, cancer and other causes. It is estimated that 120 soldiers and civilians died in detention at Makronissos. 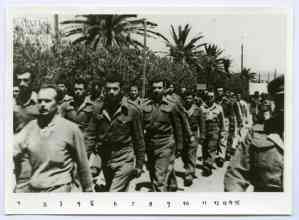 Aside from those who died on the island from various medical causes, a large number of soldiers were killed during the especially violent incidents that took place on 29 February and 1 March 1948.

On the morning of 29 February, while on their way to the auditorium for roll call, detained troops from the First Sappers Battalion became embroiled in a verbal altercation with Military Police, resulting in the beating of the former by the latter. This provoked a reaction from other detainees and, in the ensuing melee, the MPs opened fire on the unarmed detainee soldiers. Five were killed and ten others injured. The battalion’s commander, Antonios Vassilopoulos, arrived at the scene shortly afterwards and promised to investigate the bloody incident. Fearing the worst, the detained soldiers gathered in the middle of the camp, placed the dead inside a tent, and declared a symbolic hunger strike in a gesture of mourning for the victims. The following morning, 1 March, 200 armed soldiers from the Third Battalion surrounded the detainees; the camp commander, Colonel Georgios Bairaktaris, ordered them to surrender the instigators of the previous day’s “mutiny” and proceed to the area adjacent to the Seventh Company. The detainees did not comply and were attacked by the armed soldiers, who wielded clubs and opened fire. This assault resulted in more casualties than the first, although the exact number of fatalities is unclear as even official accounts of the incident differ: all told, between 11 and 16 detainees were killed and 54 injured. According to the civilian detainees, between 50 and 60 people were killed. After this murderous assault, the detainee troops were taken to the Seventh Company where, under extreme duress and beatings, many of them signed declarations of repentance.