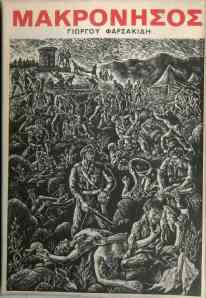 Makronissos was not just an island of exile and torture; it was also a place where scores of prisoners created artworks during their incarceration or whose incarceration inspired their later work.
Prominent artists detained on Makronissos because of their political views painted, directed or performed theatre, and wrote poetry to entertain their fellow prisoners or to record their experiences as exiles. Most of these works were published in the 1950s and 1960s, thus helping shape the public perception of Makronissos as a hellhole.
The earliest depictions by visual artists like Giorgos Farsakidis focused on capturing the horrors of torture, the physical torment. But the most profound artistic testimony is found in poetry, through the works of a generation of mainly younger poets, like Yiannis Ritsos, Titos Patrikios and Tassos Livaditis, who had experienced incarceration. Through their verses, Makronissos emerged as a landscape for poetry, a landscape of harsh memory and bitter exile. In the framework of the politicised, largely left, word, the different readings highlighted the island as a symbol of martyrdom but mostly as a symbol of resistance against state violence.

In the wake of the metapolitefsi – as the period of the restoration of democracy after the collapse of the seven-year military dictatorship in 1974 is known – there was renewed interest in Makronissos as a place of left martyrdom through works created in the main by younger artists who had not experienced exile there. The fragmentation of and the clashes within the left were also imprinted in the depiction of Makronissos in the arts. Horror and pain were associated with partisan dispute and introspection. Narratives of the Greek Civil War and what happened in its aftermath on Makronissos were no longer perceived in the singular but in the plural form in the retelling of personal accounts, feelings and internal clashes. Meantime, issues that had been shrouded in silence, most notably the declarations of repentance, now came to the fore. The cinema played an important role, through both films and documentaries. And the condition of Makronissos itself today also offered inspiration, mainly for its depiction through photography.

By remaining relatively constricted, artistic output on Makronissos has emphasised the island’s specificity as a place of exile and physical pain, a unique place in the corps of 20th-century Greek art.