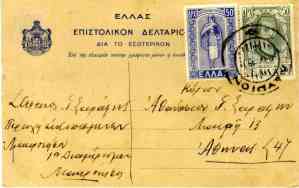 Carte postale of Stefanos Sarafis sent to his brothers Euripidis and Thanassis, 1949

The ASKI material on Makronissos is found both in its archival collections and its library. Pride of place is held by the archives of Nikos Margaris, the preeminent researcher on Makronissos who systematically collected the personal testimonies and photographs published in the 1960s in the two-volume Ιστορία της Μακρονήσου (History of Makronissos).

The incredible wealth of photographic documentation compiled by Nikos Margaris, combined with the ASKI testimonies, notes, and newspaper clippings, are a unique source for researching and visualising Makronissos. The Communist Party of Greece (KKE) archives contains letters and reports about Makronissos, theatrical skits and press clippings, while the archive of the pre-dictatorship United Democratic Left (EDA) party contains documentation on living conditions at the military camp as well as about its operation. The Archive of the General Administration of Central-Western Macedonia contains incoming open letters and repentance forms as well as letters from the education ministry to the sapper battalions on Makronissos. 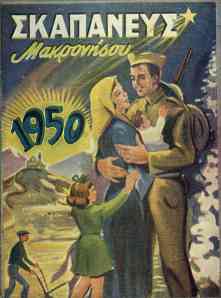 The ASKI Library contains newspapers published on Makronissos like O Skapaneas (The Sapper) and Anamorfosis (Reform) as well as rare propaganda leaflets. Published memoirs of the period’s protagonists, academic papers and media reports complement the archival collections, together comprising a unique research resource for studying a phenomenon like the Makronissos military detention centre.