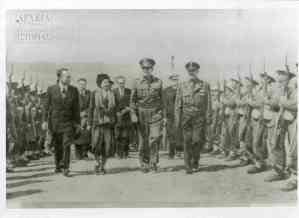 The promotion of the work being done at the Makronissos military camp from late 1947 to early 1950 was the object of an extensive and methodically organised propaganda campaign. The “reform” and “rehabilitation” of communists was presented as one of the biggest achievements of the government, army, country and Greek nation in general, comprising proof of the humanitarian manner of dealing with adversaries and, at the same time, a powerful weapon in the fight against communism.

Tours were organised regularly. The island was visited by the royal couple, cabinet ministers, senior military officers, clergy, academics and intellectuals, Greek and foreign journalists, ambassadors and other prominent figures. The laudatory remarks of these “esteemed visitors” about the work being done on Makronissos was then widely circulated. 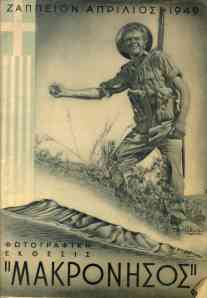 Away from Makronissos, the public events that stand out include ceremonies for the presentation of weapons and the flag by the king to battalions of “reformed” Makronissos detainees ahead of their deployment to the front. Such ceremonies were frequent during the summer of 1948, culminating in the grand celebration and parade at the Kallimarmaro (Panathenaic) Stadium in Athens on 10 September 1948 marking the departure of the Special Officers Battalion (ETAX). In April 1949, the Zappeion Mansion in Athens hosted a large exhibition of photographs from Makronissos, which included works by “the rehabilitated”, speeches and more.

Additionally, in the native towns of the “reformed”, especially in villages, letters by those denouncing communism were regularly read from the pulpit.
Special effort was made to promote Makronissos abroad, as evidenced by the visits arranged for foreign officials, the propaganda pamphlets published in English, articles published in the foreign press and other foreign-language material such as a BBC report.