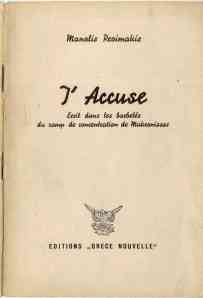 Early on, from June 1947, Rizospastis, the newspaper of the Greek Communist Party, as well as the National Liberation Front (EAM) newspaper Eleftheri Ellada (Free Greece), published accounts of the dire living conditions and, later, torture at Makronissos military camp. After both newspapers were banned under Law 509, these accounts continued to appear in the του Democratic Army of Greece (DSE) Deltiou Eidiseon (News Bulletin).

From 1949, an international campaign was mounted aimed at closing down Makronissos. The Communist Party of Greece (KKE) publishing house, Nea Ellada, issued two books that year: Makronisi: H kolasi ton dimokratikon fantaron (Makronissos: the hell of the democratic troops) and Giorgis Lambrinos’ Makronisi: To amerikaniko Dachaou stin Ellada (Makronissos: the American Dachau in Greece). The latter, which was translated into English and French, was widely distributed in the West. The parallels drawn with Nazi concentration camps, particularly Dachau, emerged as the campaign’s rallying cry. Accounts of torture were also aired on Eleftheri Ellada radio, the KKE’s radio station that was broadcast from Bucharest.

Meantime, across Western Europe, committees – most notably, in France, the Comité Française d’aide à la Grèce Dèmocratique, and in Britain, the League for Democracy in Greece – mounted active campaigns to abolish Makronissos and draw attention to rights violations and the lack of freedoms in Greece. This activity peaked in the early 1950s, with the publication of several magazine articles by the likes of Jean-Paul Sartre in Les Temps modernes and a piece in New Statesman by Kingsley Martin, who maintained close links with the Labour Party’s left flank. 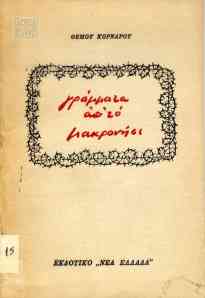 In Greece, the conditions on Makronissos were shrouded in silence in 1948 and 1949 (as the KKE, EAM, National Solidarity and their publications had been outlawed). With few exceptions, the press was rife with laudatory references to the work being done at Makronissos. In the political climate of the Greek Civil War, marked by suspension of political freedoms and persecution of left-wing ideas, information was shared by word of mouth almost exclusively between relatives of prisoners and leftists, thus establishing – albeit, underground – Makronissos’ reputation as a “hellhole”.

The silence in Greek public discourse was broken in March 1950, just days before the holding of parliamentary elections. The social-democratic newspaper Machi, edited by Ilias Tsirimokos, launched a campaign to close the “hellhole” through a series of articles beginning with the account of Evangelos Macheras, a lawyer and political detainee on Makronissos. The series, published under the header “Behind the blue-and-white curtain”, was largely comprised of letters by current and former prisoners denouncing the inhuman detention conditions and torture to which they had been subjected. The articles caused an uproar – including charges brought against Machi, whose editors were acquitted – as this was the first time that information became available to Greek public opinion about what was taking place on Makronissos. The series ran through the autumn of 1950, but over the summer, the focus was no longer on Makronissos but on Ai Stratis, another island where some 2,000 political detainees had been transferred, and the prisons. 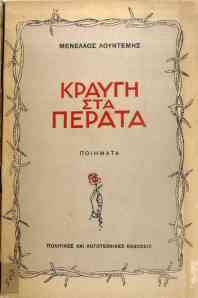 As a result of these reactions and following the formation of Nikolaos Plastiras’ centrist government on 15 April 1950, Makronissos would become a military camp for left-wing combatants only, not civilians, and conditions in the camp would bear little resemblance to those of the grim 1948–49 period.

Note: All the articles and letters published by Machi have been compiled by Evangelos Machairas in the book Piso apo to galanolefko parapetasma: Makronisos, Yioura, ki alla katerga (Behind the blue-and-white curtain: Makronissos, Yioura and other labour camps), published by Proskinio (Athens, 1999).