During the trial of the supposed “insurrectionists” involved in the bloody incidents of 29 February–1 March 1948, soldiers submitted a group statement – a declaration of repentance – that was published in the press. 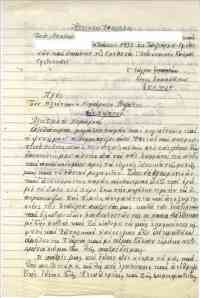 To the President of the Military Court

The undersigned soldiers of the First Sappers Battalion state and loudly declare that we have no relationship whatsoever with communism and its offshoots as we condemn yet once again the criminal actions of the anti-national mutiny whose aim is to butcher our beloved country and surrender it to the Slav enemy. We appeal for our case to be taken into serious consideration so that we can be rendered unblemished to the army and society and act at the bastions of these sacred altars and hearths of today’s struggle. Long live our Great Hellas! Long live the King! Long live the National Army! 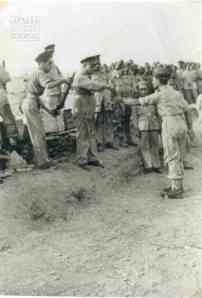 The repentance declarations were one of the regime’s propaganda tricks during the civil war. These declarations reiterated, in a stereotypical manner, the government’s views of the KKE and the civil war. The KKE was presented as a treasonous party that had used malicious means to mislead unsuspecting citizens into believing that it had fought for national liberation during the wartime occupation. The civil war was presented as a plan devised by the Greek communists, in concert with the communists of other Balkan states, to dismember the country.

For political detainees, the declaration of repentance was a painful test because they were being called upon to denounce their ideas, friends and comrades. These declarations were not a product of the prisoners’ free will, but of coercion, following violence and threats, sometimes during torture, in order to end their ordeal or to lessen their sentence. At Makronissos, it was not enough for detained soldiers to sign a declaration of repentance; they also had to make speeches to other soldiers being held at Makronissos, send letters to their respective villages to be read out at the end of the Sunday church services, or go on the road to speak in cities and villages about the KKE’s treasonous role and laud the work being done at Makronissos.

The repentance declarations were a violent deconstruction of the political prisoners’ personalities and simultaneously an attempt to shatter their collectivity. The camp commanders divided the prisoners into the “rehabilitated” and “unrepentant”, turning the former against the latter. Moreover, because the KKE unequivocally condemned anyone who signed a declaration of repentance, those who did sign were subsequently stigmatised as a dilosias (a signatory of the repentance declaration) – that is, as a traitor to the party.