In the prison world, isolation is a form of punishment meted by the authorities when a prisoner commits a serious disciplinary violation. Isolation usually involves incarceration in a very small, dark cell for a period of time during which the prisoner has no contact with fellow prisoners and given little food. On Makronissos, isolation was not a punishment for disciplinary infractions; it was ordered for detainees who refused to sign repentance declarations. 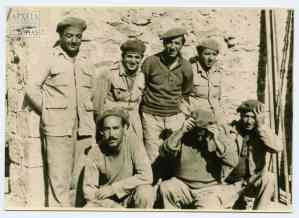 Isolation sites were located outside the main camp area and dubbed syrmata, or barbed wire cells, by prisoners as these small spaces were usually fenced with barbed wire. Small groups of detainees lived in tents within the syrmata under the vigilant watch of guards and Military Police (AM). Prisoners in isolation spent the day performing exhausting labour and were forced to spend evenings and nights inside their tents without being fed. Each group of prisoners in isolation was provided with just one bucket of potable water to share for all their needs; as a result, most prisoners went unwashed and unshaven for days. Detainees in isolation were easy targets for assault and torture. Prisoners often experienced surprise attacks during the night by Military Police, who tore down the prisoners’ tents, beat them and threw them into the sea fully clothed.

Testimonies of soldiers held in the syrmata mention gruelling labour and continuous torture. They lived in individual tents and carried rocks from sunrise to sunset daily, regardless of the weather, and were given minimal food and water. The labour was conducted under the watch of guards, who mercilessly struck the soldiers with bludgeons to either spur their pace or force them to sign repentance declarations. 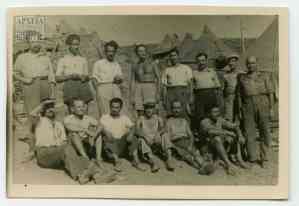 In winter 1949, political exiles who had not signed repentance declarations were transferred to the syrmata. Their daily routine did not vary greatly from the soldiers’ routine and they were forced to follow a military regimen despite being civilians and older. Reveille, roll call, mandatory attendance of speeches by the rehabilitated, hazing and hard labour that usually involved lugging rocks for use in the construction of buildings, walls, roads and so on were all part of the daily routine in the “barbed wire cells”. And like the soldiers, political exiles too were subject to beatings and night raids that tested their endurance.