LIFE AND ACTIVITY AFTER MAKRONISSOS

The discharge of soldiers and civilians who either served or were detained at Makronissos military camp was virtually impossible before the Plastiras government took power in April 1950 and introduced reconciliation measures. 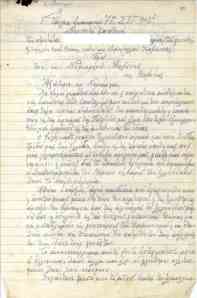 Before then, soldiers and civilians had to undergo a series of painful moral and practical actions if they wished to leave the so-called “National Rehabilitation” camp. The first step on the road to political “rehabilitation” was signing a declaration of repentance, which merely meant that signatory would not be subject to physical torture. The next steps were the public reading of the declaration during moral education classes, the writing and sending of letters along the lines of the repentance declaration, writing articles in the periodicals or newspapers published by the battalions on the island, active participation in preparing other candidates for the declaration procedure, and, finally, the complete assimilation into practicable ethnikofrosyni, or national conviction, that was sealed with the triumphal presentation to the “rehabilitated” individual of a weapon and his incorporation into a battle-ready unit on the frontline of the Greek Civil War. It should be noted that the slogan “we want arms” was a fundamental statement of the completed rehabilitation process and was chanted by the “repenters” when all sorts of officials visited the island. Additionally, the same phrase was diligently written in large white letters formed by whitewashed rocks arranged on the slopes over the battalion encampments.

Assignment to a combat unit represented the ultimate deployment against the internal enemy in a civil war that was political in nature. Furthermore, the combat activity of the “rehabilitated” in the National Army had broader meaning and great political power. On a symbolic level, it meant the actual annulment of the wartime National Liberation Front (EAM) movement, and especially the messages and circumstances created by the military actions of the National People’s Liberation Army (ELAS), as it struck at the core of the entire left resistance activity during the occupation.

In a country and a society where the military’s function and activity were linked to the very meaning of the national entity, an individual’s war activity was consistently a framework of honour and a type of internal history for each family. The decision to join ELAS was evaluated within this symbolic framework, and, in the opposite direction, the literal conscription into the National Army came to annul the message of political modernity promulgated and supported by EAM. 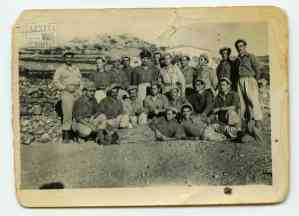 “Rehabilitated” soldiers of the First and Second Battalion in combat

Two army units comprised mainly of Makronissos detainees were highlighted as emblematic examples of nationalist pugnacity: the Special Officers Battalion (ETAX) and the 596 Infantry Battalion. The former enlisted reserve officers of the pre-war National Army who had served in ELAS during the resistance and had opted to join upon their rehabilitation at Makronissos as well as conscripts who became reserve officers upon enlistment after liberation but had been sent to serve their tour of duty on Makronissos because of their political beliefs.

In the ETAX, soldiers were chosen according to strict “nationalist” criteria and induction was ultimately a “gift” from the country. It was a unit that was armed at a grand celebration at the Panathenaic Stadium in the presence of King Paul, where each of the rehabilitated received his weapon from the monarch while kissing his hand. Afterwards, they paraded around the stadium in uniforms with martial insignia, such as a neckerchief depicting a skull, to great applause before marching through Athens, to Larisis railway station, where they boarded army trains for the front. Little detail is known about the ETAX’s combat activities. Essentially it was formed as part of the overall propaganda concerning Makronissos,

The other showcase unit of Makronissos detainees, the 596 Infantry Battalion, operated in a different framework, as the vast majority of its troops (800 out of 1,100 men) came from the “blue battalion” or Third Sappers Battalion (C ETO). The battalion operated as a regular tactical unit of the National Army, participating in the culmination of the civil war in August 1949 and displaying great bravery in the taking of a section of the Tsarno ridge in the Grammos mountains, in northern Greece, as the last Democratic Army of Greece (DSE) strongholds fell. In essence, it was the Makronissos detainees’ only contribution to the civil war that had an operational impact on the DSE, while the main effect of the camp’s operation was to use terror to weaken the moral strength of the EAM left, whether detainees at the camp or not. The battalion’s success was roundly held up as proof of the “reform” process and many of the unit’s troops served in state positions in subsequent years. 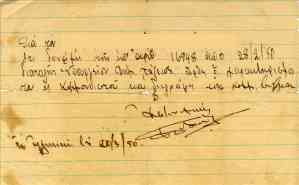 As for the largest group of detainees, the tens of thousands of mostly troops who signed the declaration of repentance and were discharged from Makronissos under the measures adopted by the Plastiras government, most did not return to their villages. There, the public promotion of their repentance declarations by the local authorities had achieved its purpose: it had exposed them and likely invalidated their left-wing identity. But just as the declaration alone was not sufficient proof of ethnikofrosyni at Makronissos, it was equally insufficient in the small communities from which the detainees hailed. They thus chose to settle in the greater Athens area in a desperate effort to secure both anonymity and a wage to support their livelihood. Few became public servants, with the exception, perhaps, of some who had served in combat units. Few pursued studies, as university enrolment required a loyalty certificate and the procedure to obtain one would bring them to the attention of the police. Those who had been students before Makronissos continued their studies with difficulty. Many of those who were educated or had not been able to complete their studies became accountants while others went into publishing, even as salesmen. For the most part, former detainees were absorbed by the construction sector, which over a period of three decades built up Athens and distanced it from its past. In this world, many former Makronissos detainees were efficient and resourceful, working as craftsmen and small-scale contractors, but were also living examples of the post-civil war climate of fear. Those who signed the declarations were shut out of the ranks of the Communist Party of Greece (KKE) ranks because of their “weak” political character. Many were active in the pre-junta ranks of the United Democratic Left (EDA), but most were gradually incorporated into Andreas Papandreou’s socialist PASOK party in the 1970s and 1980s as voters and supporters during the metapolitefsi, that is, the

The very limited number of detainees who did not sign declarations were exiled to Ai Stratis, remaining there until the late 1950s when, under a regime of renewable furloughs, they settled in Athens under police surveillance.

The afterlife of those who experienced the horror of Makronissos remained linked to the terror they experienced in the camp. A glimpse of it can still be seen, even five decades later, in the faces of the former detainees visiting the island to participate in commemorations of the events that took place there.