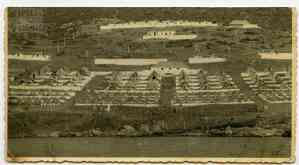 The military camps on Makronissos were established by the National Army to “cleanse suspect” soldiers and officers from the ranks and thus to safeguard the combat-readiness of the troops deployed against the Democratic Army of Greece (DSE). Based on information provided by local police authorities, the army deemed anyone on the left or who had participated in the National Liberation Front (EAM) resistance as “suspect” and, from the summer of 1946, assigned them to special battalions.
The soldiers of the First Battalion were first gathered at Liopesi in Attica and later transferred to Agios Nikolaos in Crete and, from there, to the island of Giaros. The Second Battalion’s troops were initially amassed at Larissa, and the battalion’s base was subsequently transferred to Rethymno on Crete, then Liopesi, and finally to Porto Rafti, also in Attica. The troops of the Third Battalion were first assembled at Mikra and later transferred to Dudular (Diavata), both in Thessaloniki.

The Second Battalion was the first to arrive on Makronissos, on 28 May 1947, followed by the other two battalions over the next two months. Makronissos’ history can, broadly, be divided into three periods.

• The first spans its founding through spring 1949, when soldiers and officers were the main focus of the violent “rehabilitation” process.

• The second extends from spring 1949 to summer 1950, a period during which the number of civilian detainees at Makronissos grew (due to preventive arrests, male and female political exiles).

• The third period runs from summer 1950 until the closure of the military complex, when the only active facilities were Athens Military Prison (SFA) and a detention area for “suspect” soldiers – albeit with comparatively better conditions.

Makronissos is a compound of encampments and detention facilities that includes:

• the three Sapper Battalion camps, which in spring 1949 were renamed Special Conscript Battalions (respectively, A ETO, B ETO and C ETO). 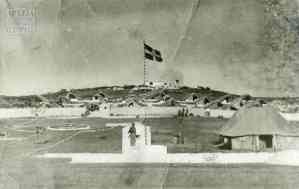 • Special Civilian Rehabilitation Schools (ESAI) for civilian exiles, which were established in the first two Special Conscript Battalion camps. The A ETO-ESAI was created in March 1949 and B ETO-ESAI in November 1949.

• the disciplinary camps for political exiles that were established in November 1948 in the island’s northern section and guarded by the Fourth Gendarmerie Battalion; political exiles were later absorbed by the Special Civilian Rehabilitation Schools.

• the Special Women’s Rehabilitation School (ESAG), which was created for women political exiles in January 1950 at the A ETO. 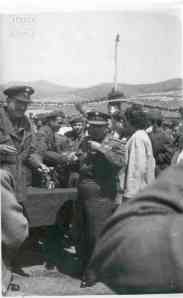 Makronissos was under the jurisdiction of the Army General Staff’s Bureau B XI. In spring 1950, the camp was under the command of Brigadier Georgios Bairaktaris, with Major Antonis Vassilopoulos, Major Ilias Toliopoulos and Lieutenant-Colonel Spyros Himariotis serving under him as the commanders of the First, Second and Third Battalions, respectively. The infamous Colonel Thomas Soulis was the SFA’s commander.
The number and composition of the prisoner population at Makronissos changed over the course of the Greek Civil War. In summer 1947, the number of detainee troops and officers was almost 10,000; in May 1948, there were 15,814 soldiers and officers as well as 728 political prisoners and exiles on the island; in August 1949, there were 7,500 soldiers and 20,000 civilians, while that December, the prisoner population was 5,521 soldiers and 11,247 political exiles. In total, according to the Army General Staff, some 25,000 soldiers and officers had been “rehabilitated” by October 1949. Many of those “rehabilitated” troops were deployed in Greek Army combat units against the Democratic Army of Greece during the civil war.

Although Makronissos’ army camps had been in operation since 1947, the law governing the running of the camps was not passed until after the mass transfer there of political exiles. More specifically, Resolution 73 of 14 October 1949 on “National Rehabilitation Measures” established the Organisation of Makronissos Rehabilitation Centres (OAM). The OAM was under the jurisdiction of the Army General Staff and, according to the resolution, its purpose was “the reform through enlightenment and education” of the detainees. Thus, the Greek Army was now officially empowered not only to detain soldiers but civilians as well, and Makronissos would be transformed into a massive prison for all political opponents of the regime.